Fashion statement of the middle class once upon a time, Piaggio Vespa returns again to India. The much awaited Italian brand Piaggio launched Vespa LX125 into the Indian market with a premium price tag of Rs. 66,000.

However, as announced earlier, there will not be LX125 in the name and the scooter will be called Piaggio Vespa or just Vespa. The new generation Vespa is a gearless scooter like anyone of us would expect and runs on a 125cc, 3-valve motor that churns out top power of 10.06 PS and peak torque of 10.6 Nm.

Piaggio developed the engine with variomatic transmission and the specially designed engine is made to run 60 km per liter of petrol when run at a steady speed of 50 kmph which will be the best in class mileage for a 125cc scooter at this time. The scooter features good old drum brakes and trailing link front suspension. 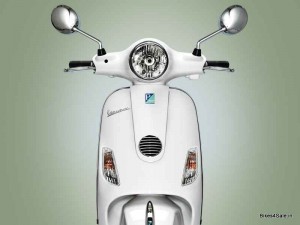 Piaggio is clear to have one version of the Vespa for sale. The company will sell the new Vespa through its 50-strong dealer network span across 35 cities. The new Vespa comes from Piaggio's two-wheeler plant at Baramati, Maharashtra.

What makes the Vespa unique is that it"s the single scooter brand in the world having single-piece monocoque chassis. Vespa was first sold through Bajaj in India during 60s and then through LML. Piaggio"s collaboration with LML lasted till 1999. Now the company plans to repair the dented brand as well as give a run to competition including Honda Activa, Suzuki Access and Swish on the Indian roads all by itself and had set up plant near Pune.

Piaggio also have made it easier for riders to change tyres in the event of a puncture which is quite likely possibility on the Indian roads by modifying the rear wheel structure. Vespa"s horn is also louder than you would expect of a gearless scooter to help squeeze through tight traffic.

Company says that the Vespa is a premium scooter brand and pins in a premium price tag of Rs. 66,661 rupees (Ex-showroom Delhi). Vespa comes in a wide range of color choices. Yet, only time will tell if the retro-looking, new brand scooter with drum brakes and no telescopic suspension will be a hit or flop amongst conservative Indian consumers.
Written by Harikumar Varma.
Last updated on 27-01-2019. Published on 27-04-2012.